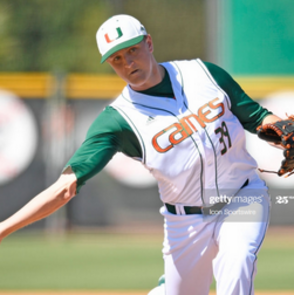 Cooper Hammond Joins the Burn high school age division in 2020. Cooper is a former Burn player and has a storied past career. He will coach the Florida burn 2024 Platinum team this summer.

Possibly the most dominant high school pitcher this area has seen, Hammond was named the Florida state 7A player of the year in 2013 after leading Venice High School to its second consecutive state championship title under Coach Faulkner. He was also MVP of that team as well as MVPitcher in 2012.

Cooper moved on to pitch at the University of Miami for four years and became a stalwart in the Hurricane bullpen. He graduated from UM in 2018 and now teaches in the ESE program in St. Petersburg. We are very excited to have Cooper Hammond back with the Florida Burn as a coach in 2020.