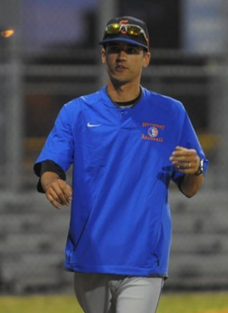 The Burn gained another top notch coach this fall when Brett Andrzejewski joined the staff to coach in the 2023 grad class.  Brett became the first head coach at Parrish Community High School (Manatee County) in 2019 after leading Southeast High School from 2015-2019. Southeast won the district championship in 2017 and placed in the state academic rankings consistently. He began his coaching career as a pitching coach at Mississinewa High School (Gas City, IN) in 2015. Brett also served as a head coach in the Indiana Bulls travel program from 2011-2015.

Andrzejewski played his high school baseball in Indiana (Mississinewa HS) and went on to have a very successful college career. He pitched at Franklin college, Tallahassee Community College, and then at Purdue University where he was named to the All Big Ten Academic team twice led the Boilermakers in ERA, and led the conference in appearances in 2013. Purdue won the Big Ten championship in 2012 during Brett's time there.

Brett and his family currently reside in Manatee County. The Burn is very excited to have him on board and our players should look forward to the opportunity they can experience playing under his guidance.