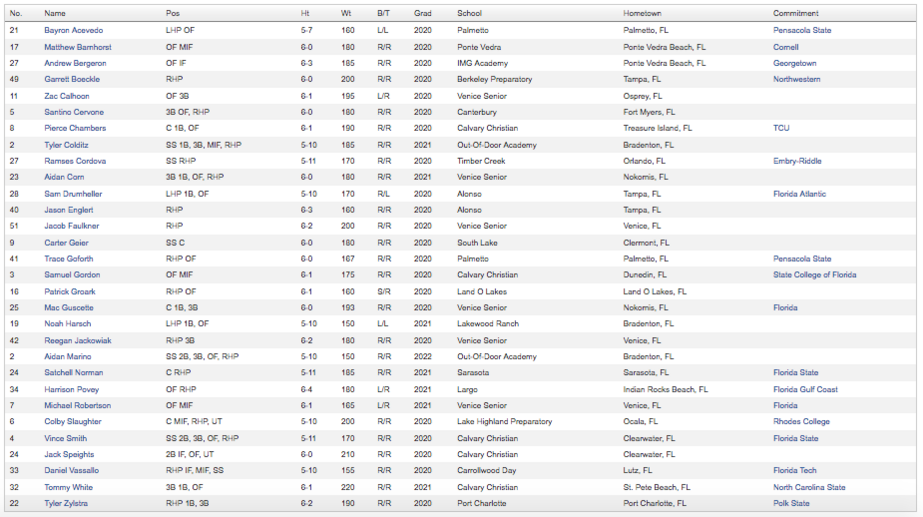 For anyone that thought it was a fluke, the Florida Burn repeated as the Perfect Game WWBA World Champions in 2019. This year's Burn squad led by the 2020 Platinum team pulled off a remarkable 8-0 run through the best teams in the land in Jupiter, Florida. This year's entry was the third Burn team in seven years to reach the championship game and the second to bring home the most coveted title in amateur baseball at this level.

Once again the Burn was led by sensational pitching from a staff that has led the nation in runs allowed for the past year. Danny Vassallo, Jacob Faulkner, Trace Goforth, Sam Drumheller, Tyler Zylstra, and Jason Englert carried the bulk of the load and were all exceptional. The Burn staff allowed ten runs in eight games against the best lineups in the country. Pretty special.

Mac Guscette (2020 Venice HS) was named the Most Valuable Player in the 2019 WWBA World Championship. The Burn catcher was his usual self, doing damage with consistent quality at bats and manning the pitching staff like a pro. This is Mac's second Jupiter title (Tommy White, Aidan Marino, Ramses Cordova, Drumheller, and Faulkner also were members of the 2018 championship team). Vince Smith (2020 Calvary Christian HS) was arguably the king of the clutch all week with several huge hits including a walk-off HR in the semi-final game against East Cobb Baseball. Vince's double in the bottom of the 7th in the final pool play game paced the Burn to another eventual walk-off in a 3-2 win against a tough Nelson Baseball School team. Santino Cervone (2020 Canterbury) also provided a number off key hits including the game winner against Nelson. Sam Gordon, Michael Robertson, Tommy White, Aidan Corn, Zac Calhoon, and Ramses Cordova all delivered key hits in clutch spots. The entire team was stellar all week when the big hit was needed.

So many things must fall your way to win this event. This team showed some strong grit coming back and winning five games in which they trailed at some point. The "little things" were executed almost to perfection and the group bought into total team play. It is the only way things like this championship are accomplished with so many talented teams involved.